The SuperVets is an ABF Gold Point event run in Perth each year by the Bridge Association of WA.  The bridge governing bodies wish to use the tournament to celebrate the extraordinary contribution that older bridge players have made to the game we love.  The tournament is restricted to bridge players over the age of 75.

This year, in spite of the cloud of Covid over the rest of the country, in Perth we were able to attract a field of 84 players for a ‘face to face’ bridge tournament. The event was held on Sunday 8 November and run in a Swiss Pairs format comprising six matches of seven boards per match — an exhausting day of bridge but from the feedback it was enjoyed by all competitors.

The field boasted many Grand Masters and players who had reached Gold and Silver Life Master Status.  Although they had been playing for decades, their bridge playing skills were as formidable as ever.  It was truly awe inspiring to see a room full of veteran bridge players, horns locked in silent competition.

The 2020 SuperVets  tournament was won by Geoff Yeo and David Schokman. 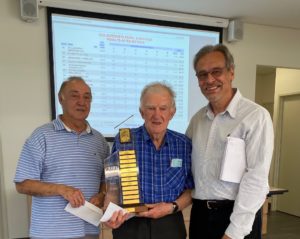 Runners up were Wendy Driscoll and Jan Blight. 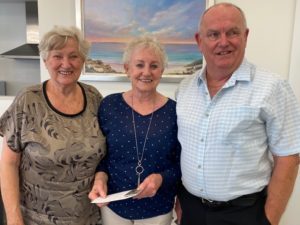 In third place were David and Beverly Petterson. The best non medal player (80-90) was Rod Bryant and the best player 90+ was Judy Crooke.

Analysing the demographics of players this year, of interest was that players from 11 BAWA affiliated club participated.  There were 3 players in the 90+ age group, 45 players aged 80-90, and 34 in the 75-80 age bracket.

Bridge is recognised as a sport by the International Olympic Committee.  It is a game that engenders the following attributes and values common with other competitive sports — technique, competitive attitude, strategy, fair play, discipline, stamina, quick reflexes, rapport with your partner, and concentration.  Contract bridge is an excellent gymnastic of the mind for men and women of all ages.  Medical research in the United States has concluded that playing the game significantly lowers the risk of developing Alzheimer’s disease and is even said to boost the immune system.

This year’s event was sponsored by the WABC and by the TBIB.  WABC provided their wonderful club rooms and facilities free of charge.  TBIB, Insurance Brokers have long sponsored bridge events across Australia. The organizers are grateful for the generous support received from both sponsors.

After a highly successful tournament in 2020, planning for 2021 has already commenced.  Next year will be the Tenth Anniversary of the SuperVets in WA.  Entries can be made online via the BAWA website.  If prospective competitors need further information or assistance with lodging an entry for next year’s event, they are encouraged to contact the Tournament Organizer, John Aquino.

Get The Best Protection